Vietnam has a long history of growing tea.  Recently, a forest with many big old tea trees has been found near the border between Vietnam and China. These trees are believed to have lived for millions of years. At first, Vietnamese people only grew some small trees near their houses or picked up tea leaves in the forest. After the French invasion, they invested in researching and expanding the tea-growing scale y opening plantations and enhancing the quality.

Until now, tea leaves are grown in different regions throughout Vietnam. Together with the tea-growing industry, the Vietnamese have developed the tradition of drinking tea. In the past, only elders enjoyed having tea and serving it to distinguished guests. Nowadays, many tea houses and milk tea ships have incorporated into serving drinks to customers of all ages.

Vietnam has plenty of tea-growing regions. The most popular ones concentrated in northern provinces such as Thai Nguyen and northwest region and in central highlands like Lam Dong.

Thai Nguyen has a reputation for perennial manual tea plantations. It hass the largest cultivated land for tea in Vietnam, and the quality if the tea here is inexpressibly good. A famous and high-grade product of Thai Nguyen is Non Tom rea from Tan Cuong Ward. Instead of plucking the buds and two young leaves like the normal procedure, tea growers here only take the buds. For a better taste, the picking process must start from dawn till midday that is the beliefs of the locals. Like other types of Vietnamese tea, Non Tom is bitter when you have a gulp, but a sweet lasting flavor would follow and make people fall in live with it.

Ha Giang is one of the provinces has the oldest Shan tea area in the country. From the early 20th century, the French investigates tea in Ha Giang and take attention to the ancient highland tea. It is Shan tea with big leaves, many snow-white hair covered buds and have good quality. So that people called Shan tuyet.

In the natural forests of Ha Giang, Shan Tuyet tea grown mixed with other forest trees. In Ha Giang, Shan Tuyet tea located throughout most of the districts in which the ancient tea areas have 300-1000meters height. So far, some areas of province has highly specific for the an ecological tea such as: Lung Phin, Phin Ho, Tham Ve, Bo Duot,… that represents the oldest tea area of Vietnam. This is the local that produces the famous Shan Tuyet tea. The reputation of Shan Tuyet tea conquered not only the consumers but also the connoisseurs in enjoying tea.

The Shan Tuyet tea in Ha Giang can be divided into two main types, there are: small Shan tea leaves, tea in Lung Phin with typical characteristics as raspberry or candle shape. Raspberry shape tea has a small leaf tea is less than candle shape tea. In addition to the perennial tea, Ha Giang still grows tea in the lowland.

Provinces like Son La or Lai Chau have unending tea hills that provide smooth and soft oolong tea. Especially, Yen Bai province smooth and soft oolong tea. Like Ha Giang Province, Yen Bai province is also well-known for Shan Tuyet (Snow of the mountain) tea. These tea leaves are coated with layer of milky lanugo. Its smell is heavenly and its taste is persistently sweet, which give it the title as “the Queen of Green tea”. 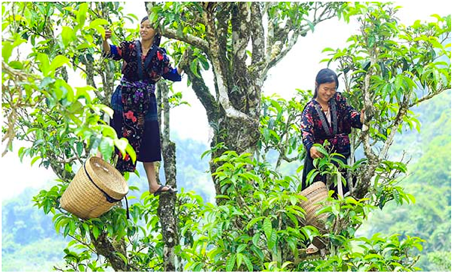 The northern localities have been touted as a cradle of Vietnamese tea, and tea products from the region are popular in Europe, according to Barbara Dufrene, former Secretary General of the EU Tea Committee.